Introduced as a feature of Logo programming language in 1969, turtle graphics connect computer drawing to how we move our bodies through space, and encourage approaching computational form with a new mindset.

The Logo computer programming language was created in 1967 by Wally Feurzeig, Seymour Papert, and Cynthia Solomon to explore how programming can help children learn critical thinking and problem solving. One of the creators of Logo, Seymour Papert, wrote the 1980 book Mindstorms which discusses Logo and its goals:

In many schools today, the phrase “computer-aided instruction” means making the computer teach the child. One might say the computer is being used to program the child. In my vision, the child programs the computer and, in doing so, both acquires a sense of mastery over a piece of the most modern and powerful technology and establishes an intimate contact with some of the deepest ideas from science, from mathematics, and from the art of intellectual model building.

One of the key ideas introduced in Logo was turtle graphics. The turtle was originally a small programmable physical robot that carried a pen and could trace its path as it moved. Logo could control this turtle with simple commands like left and right to turn and forward to move. This idea was extended to drawing on-screen using a virtual turtle. 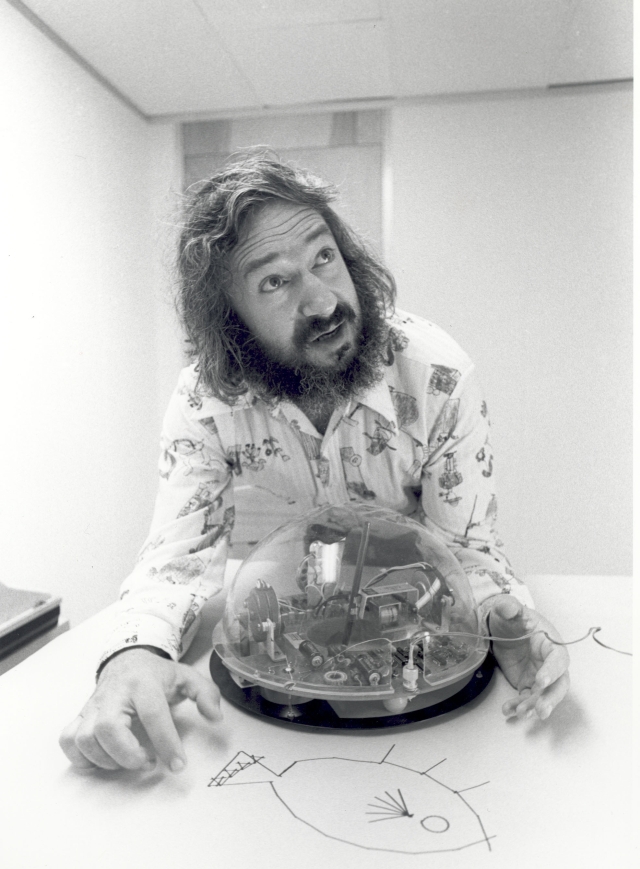 A virtual turtle in action!

Turtles make it possible to change how you think about drawing and give you a new set of tools for expressing an image in code. They don’t change what you can do: the turtle class provided in this chapter uses the standard p5.js drawing API under the hood. Instead, using a turtle changes how you do it.

Logo’s use of turtles allows students to make a strong association between what happens in the program and how they move their own bodies in the real world. Papert called this body-syntonic learning. Body-syntonic learning supports understanding of abstract ideas through sensory experience. Papert often discussed these ideas in his writing and videos.

Seymour Papert and Students (1972) Video An in-depth video where Papert discusses his work on computer-aided teaching for children.

Seymour Papert on Logo (1986) Video Series A two-part video series where Papert shares his thoughts on learning and evaluates the technical aspects of Logo.

Seymour Papert on Logo: Teaching (1986) Video Watch the clip from 4:25 - 6:40 to hear Papert talk about turtle graphics and body-syntonic learning.

Learning with Toys (1986) Video A short excerpt where Papert touches on learning, play, and programming. 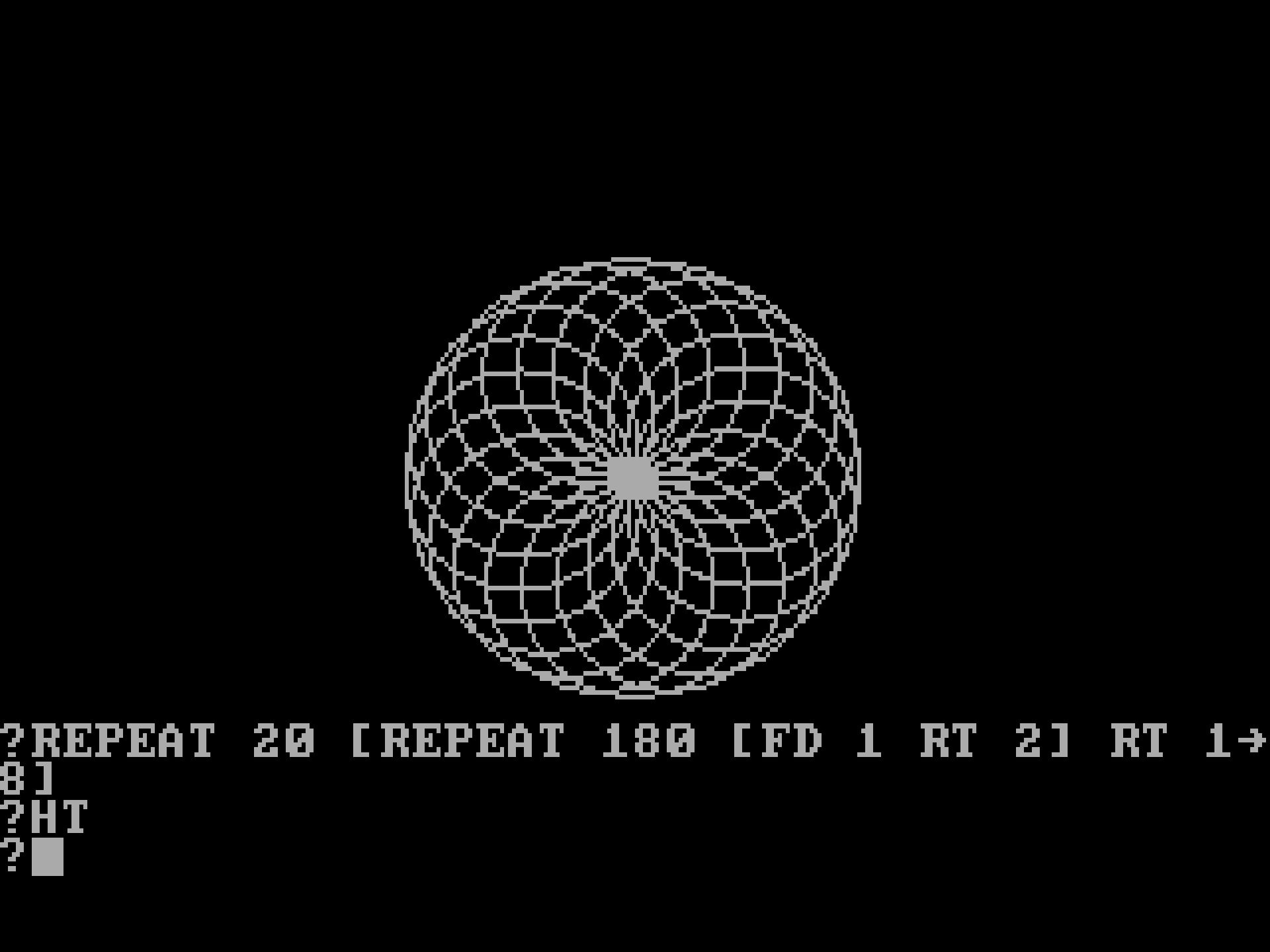 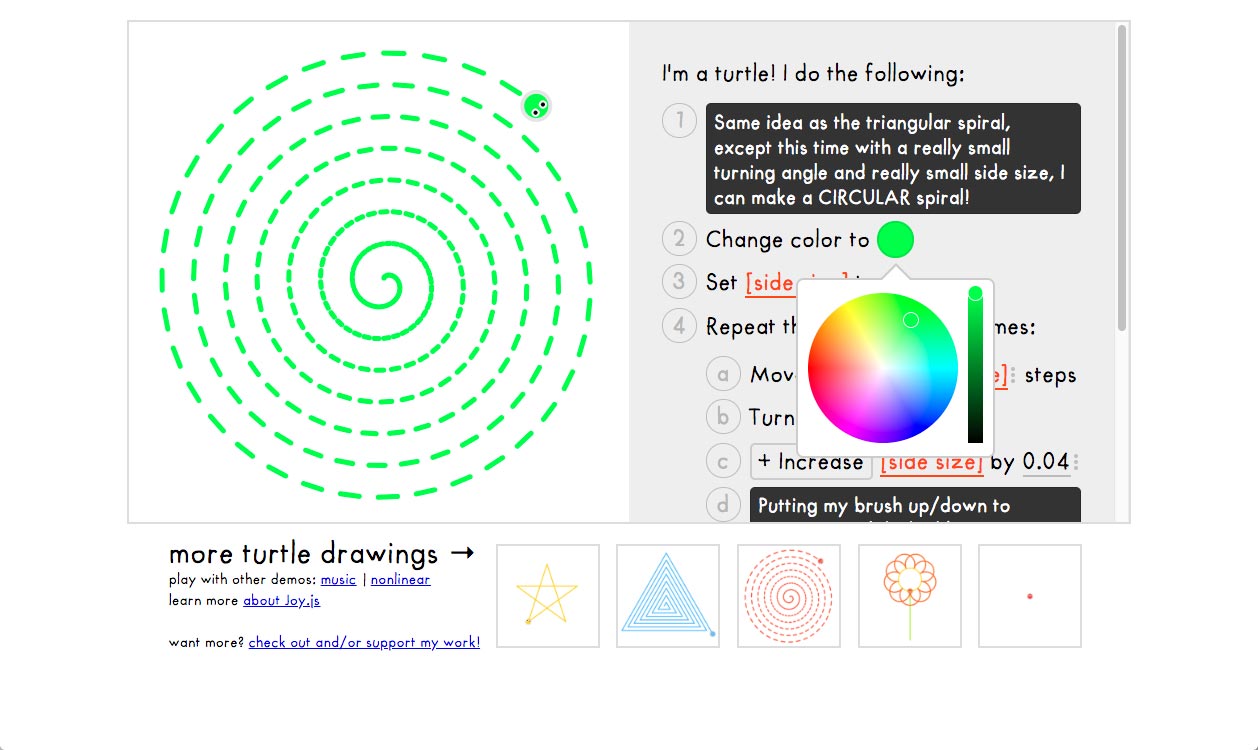 Did involving your bodily senses and physical movement impact how you thought about the program?

A Shift in Perspective

Most graphics APIs—including p5.js—use a Cartesian coordinate system. To draw a line in p5.js you might use code like this:

This prioritizes the x,y coordinates of the start and end of the line. The length and angle of the line are deprioritized. You can infer them, but they are not directly specified. Also note that these positions are absolute coordinates measured on the canvas.

Turtle graphics flips these priorities around. This is code you might write to draw a line using a turtle:

Now the line’s angle and length are specified instead of its start and end. This is one of the key shifts in thinking encouraged by turtle graphics.

The second shift becomes apparent if we ask where the line in the second example should be drawn. We can figure out the angle and length of a line from its start and end points, but we can’t go the other way. Knowing the length and angle of a line does not tell us where it should be drawn. In turtle graphics, commands like right and forward are relative to the turtle.

Drawing a square using rect and Cartesian coordinates works well. The turtle graphics version is longer and less clear. But for the star, the Cartesian code is very awkward and unclear. Changing the star’s position or size would take a lot of work. Work should be done by computers, not programmers. The turtle code for drawing the star mirrors how we might describe the figure. It is a more natural expression of the idea, easier to understand, and easier to modify.

Both approaches can be used to draw a square or star. We are not forced to draw specific things by either framework, but each framework encourages a different way of thinking. Just as working directly with pixels encourages different forms than working with higher-level drawing APIs, working with turtle graphics encourages yet other forms.

Two of the forms that turtles tend to encourage are spirograph-like figures and recursive trees.

This example draws a 72 pointed star. Technically, this isn’t really what a Spirograph draws, but shares some visual characteristics, like rotational symmetry.

Turtles are often paired with recursion to draw tree-like forms. Study this ,simpified example to see how, and see the Recursive Tree II below for a little more detailed example.

Make your own Drawing Machines

Changing your approach and mental model has a significant effect on the solutions you create. Turtles are just one example of a “drawing machine” that provides a new way of thinking about drawing. Inventing your own drawing machine is a rewarding exercise that can lead to new ways of approaching problems, a deeper understanding of programming, and new aesthetics to explore.

A Simple Turtle in p5.js

To explore using turtle graphics with p5.js, I’ve created a basic turtle class for you to use. The examples above and below use this library, and you can copy it into your sketches.

This basic example creates a turtle and uses it to draw a triangle.

This example moves the main drawing code into the drawTriangle() function which takes a turtle as its argument. The location of the triangle is controlled by moving the turtle before calling drawTriangle().

The turtle class can also draw images aligned with the current position of the turtle.

You can use push() and pop() together to take a break from drawing one shape, draw something else, and then return to original shape.

A common application of turtle graphics is drawing organic branching shapes, like trees.

Style Tip: If you change what a function does, you should change its name as well. Did you change the function name when completing challenge 6?

Explore using turtle graphics. Start with a crazy spirograph thing and get that out of the way. Then see how much variety you can get from the turtle.

Work with a partner. Draw a garden.

The Seeds that Seymour Sowed Essay Mitchel Resnick reflects on the work and research of Seymour Papert.

Rough.js Library A tool for creating graphics with a sketchy, hand-drawn aesthetic.